He spends 40 hours each week building custom motorcycles at his shop, Roy’s Toys Customs. The only thing that comes between him and the work he loves is Lieutenant Martin’s full-time job as a division commander at the Glendale Police Department.

In 1994, Martin and seven friends walked into a Harley-Davidson dealership and put their names on the waiting list. A year later, Martin had his first motorcycle, a Heritage Softail Special. It didn’t last long. Martin disassembled his new bike into its component pieces. His first complete rebuild was underway.

Martin, who grew up in Denver, wasn’t naive when he removed the first screw from his Harley. He was about four years into his career as a machinist. “Working at a machinist shop gives you the ability to manufacture parts out of different materials,” he said. “I can visualize what a part is going to look like before I make it.” Throw in his creative drive, and Martin’s project would make sense to his police colleagues: He possessed the means, the motive, and the opportunity.

About a year after he built his custom, Martin went to Laughlin River Run, a motorcycle rally that takes place every year in Laughlin, Nevada. There, he met a man who was impressed with the craftsmanship he saw in Martin’s bike. After talking with Martin, he ordered one for himself. Martin hadn’t yet envisioned turning this hobby into a full-fledged, full-time business. “That threw me off guard,” he said. “I was not expecting it to take off that fast.” But he couldn’t sideline the opportunity to keep creating. The orders kept coming in, and he kept learning with each bike he built.

In 2001, Martin undertook a career change. It was precipitated by a long drive. But the new field he entered was not building motorcycles. And the long drive was not on a motorcycle; it was in the passenger seat of a police cruiser. A friend of his invited him to ride along with him during a patrol shift. Afterward, Martin said he just felt a drive to become an officer himself. So, after 21 years as a machinist, Martin enrolled in night school and put himself through the police academy.

When he’s not working, he’s likely building motorcycles. Martin takes a methodical approach, happy to take a more time-consuming route if the result is a better end product. For example, instead of using spray paint, which can quickly cover a lot of bike at the expense of incomplete coverage, Martin powder coats his customs. To powder coat, Martin first must sandblast every part that needs painting until it is completely clear. Then he applies a powder that clings to the surface and bakes the entire thing as if it were a casserole: 400 degrees for 45 minutes. The result is a durable finish that reaches into every corner and crevice. Martin said he even coats the sides of parts that aren’t visible once the bike is assembled; anything less would feel incomplete to him.

Last year, Martin took on a new of project. A former coworker of his, who also happened to be a Marine, asked Martin if he would be interested in building a motorcycle for Warrior Voices, a nonprofit organization that gives veterans the training and equipment needed to pursue careers in voice talent, including radio and commercial voiceovers. This line of work can be particularly helpful for veterans who return to civilian life with physical disabilities. Martin took a beat up 1979 Ironhead Sportster and rebuilt it from the ground up. To reflect the people this bike would represent, Martin added such details as gas cap made out of an old grenade and a taillight out of a solid brass microphone. The bike is going to be auctioned off with the proceeds heading to Warrior Voices. Those in the Denver area will be able to see it in person as it will be used throughout the RugbyTown 7s rugby tournament, performing such ceremonial functions as carrying the game ball out to midfield. The tournament is a particularly fitting site for the bike as RugbyTown 7s will host the rugby teams form all five U.S. armed services, as well as a few from overseas.

Roy’s Toys Customs has become a family business and a chance to pass down skills and values to his children and grandchildren. His daughter, Nikki, is the chief operating officer, and she also builds her own bikes. His son, Tony, recently built his first frame-up bike. His wife, Christy, and daughter-in-law, Allison, both contribute to the success of the company and he hopes his three young grandchildren will catch the bug, too. The chance to do work like this is an opportunity that Martin says isn’t available to kids growing up today. “Our young people are so in tune with TV and video games,” Martin said. He wants to encourage them turn off the tv and spend more time outside or learning how to put things together. “If we don’t show these kids how to do this, share these skills with them, this stuff is going to die off,” Martin said. 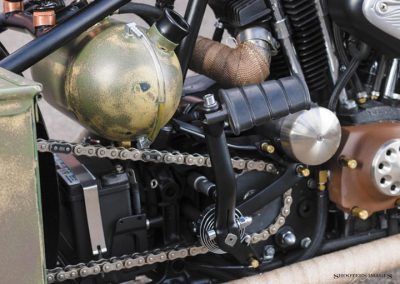 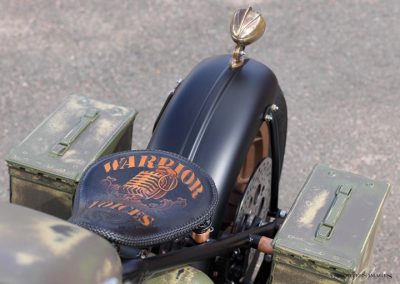 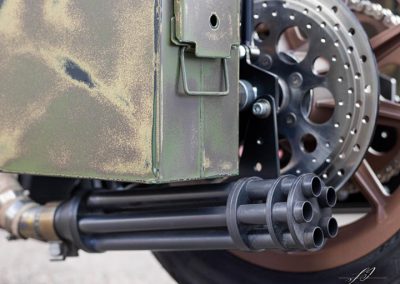